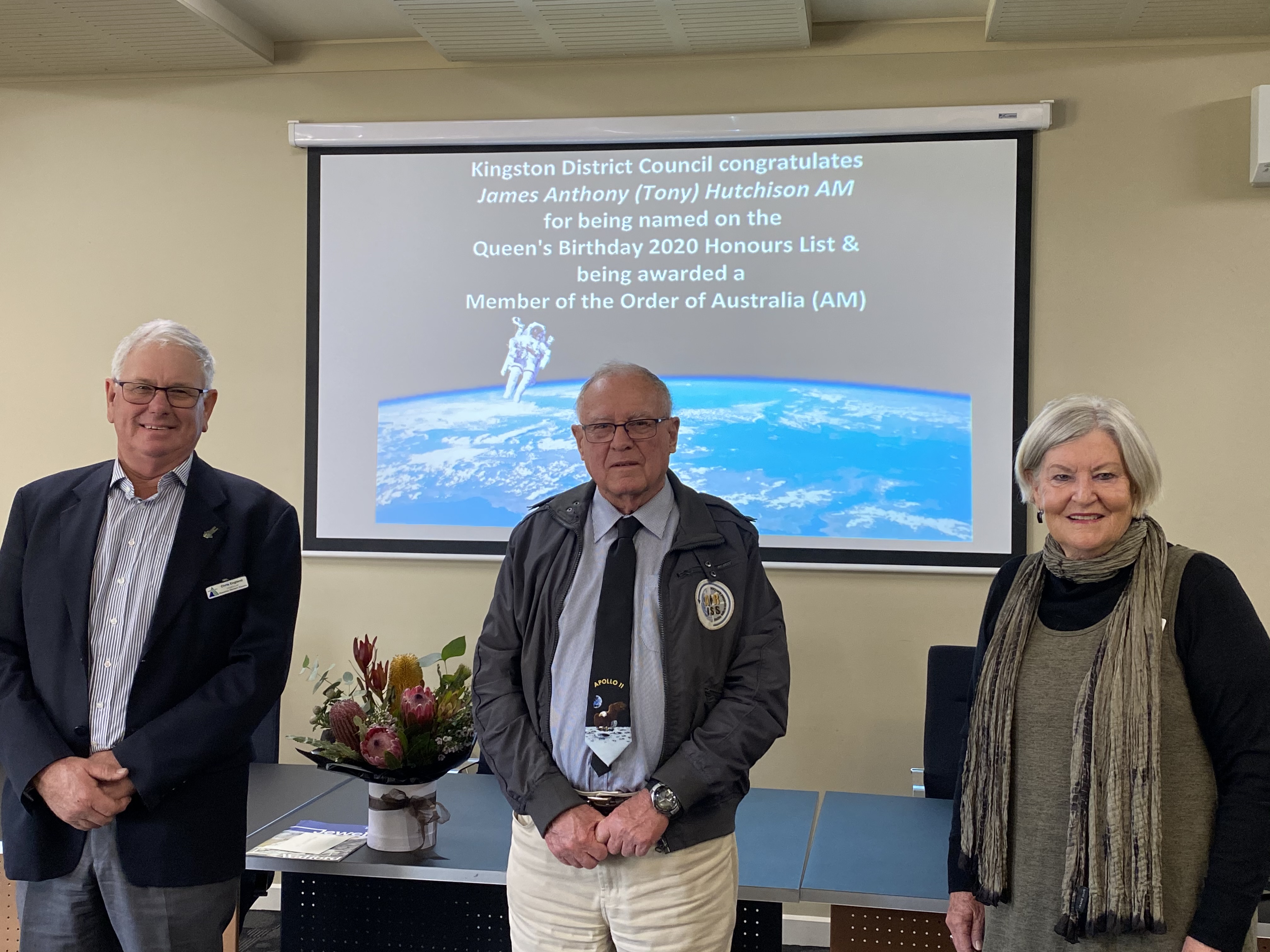 Council, at a Mayoral Civic Ceremony held this morning, recognised long-time Kingston resident Mr Tony Hutchison after he was named in the 2020 Queen’s Birthday Honours List, where he was awarded the prestigious Member of the Order of Australia medal.

In addressing the small gathering, Mayor Rasheed said “Tony is a well-known Amateur Radio International Space Station (ARISS) team member.  He has dedicated years of commitment to amateur radio, particularly in amateur satellites and amateur radio space communication and we are delighted to be able to acknowledge these key achievements today”.

Years ago, Mr Hutchison developed and installed a telebridge radio ground station to support scheduled ham radio communications between astronauts in space and students in schools. His telebridge ground station consists of an amateur radio satellite station with special equipment and tracking antennas.

To speak with astronauts who have amateur radio licenses, students connect via a Verizon conference line from their school to the telebridge station, and then with the astronaut using ham radio. The astronauts supporting scheduled ARISS contacts use the ARISS radios on the International Space Station.

Mr Hutchison leads all ARISS educational contact initiatives performed in Australia and people all over the world regard him very highly for his efforts to give students the opportunity to be inspired in science, technology, engineering, arts, and mathematics by talking to an astronaut in space.

Mayor Rasheed said, “Mr Hutchison’s engaging personality, infectious enthusiasm and outstanding professionalism are highly praised by the many astronauts who have employed him and his station over the years.”

Chief Executive Officer Nat Traeger reflected on how impressed she was when she got to see first-hand the positive impact Mr Hutchison has made at the students of the Kingston Community School, when he gave them the very rare opportunity to have a radio link-up with astronauts on the International Space Station in September last year.

This experience was also made accessible to members of the Kingston community, who were in awe of Tony’s ingenuity and obvious love for amateur radio.

“How lucky was anyone present that day to share in this unique experience and watch the pride and joy on the students face who were lucky enough to ask questions and have them answered by astronauts circling earth on the international space station!”, she said.

Mayor Rasheed also commented on Mr Hutchison serving Council as an elected member in the 2010-2014 term.  “This makes us proud to honour his achievements and knowing he has represented his community as part of our team in years gone by”, she said.